Day trip to the end of the Ressel

Last spring Sebastian Kuster and I wanted to dive into the siphon 6 and check out the south aisle. Markus Schafheutle told me a lot about this passage and asked us to measure these unexplored passage in case we would go. As it had always fascinated me, to go further than the “mandatory bivouac-hall”, I was looking forward to the dive. Unfortunately we had to cancel this but shortly before surfacing in S1 due to technical problems with Sebastian’s rebreather.

Shortly thereafter, Rick & John explored exactly this aisle until the non-traversable end. They have stayed twice overnight in the cave for this exploration. The way it looked, the Ressel was now fully explored. Still, I was tempted by the Ressel and I really wanted to dive at least once to the end and have a look into the south aisle. Somehow it never worked out either due to time restrictions or lack of available buddies. Since our projects in the “Sorgente Bossi” and in the “Covol di Veci” were to start again, I decided at short notice to pack up my gear and go to France on my own.

On Friday, August 17th I started early in the morning. After arriving in Marcilhac-sur-Célé it went straight to the Ressel to see if there were any divers who could tell me something about the conditions. Result: Water level in the Célé is good and visibility in the Ressel until the big funnel very murky.

The start on Saturday was very early. The first step was, of course, to carry the the diving gear down to the Célé. At exactly 08:14 clock, I started to dive down into the Ressel and press the trigger of the Bonex Discovery RS. With plenty of thrust and superb visibility from funnel onwards, I dash along the aisle. As you ascend in S1 I see on the left side a scooter at about -34 meters labeled “MAX”. Oh, apparently I meet other divers in the bivouac hall…

Already after 54 minutes I’m at the 6 meter stop of S1. Since up to now everything has been running without any problems, I decide to dive all the other spots as well. These are “Lac Isler” and “Lac Boulder”. Then back into the bivouac hall. Fortunately, the water level is good and I can scooter through the „Schikanne“ slowly. And again I thank Fritz…

After 120 minutes, I ascend in the bivouac hall and deposit and all the material in the pot. No one answers my calls. With the device on the back I get out of the water and sit down on a large rock. Now comes the trickiest moment, is it possible to breathe the air? Yes it is, but for a 100 meter sprint, the oxygen level is probably not good enough…

Nonetheless I go straight to siphon 4, in my suit and with the equipment on my back.There, I deposit the device at the entrance to the water and go back. Now I take off the suit and find out that the right leg is totally flooded. But since I did not have any problems with being cold that does not stop me yet. So I put on my neoprene socks and sandals that I had in a grinding bag attached to the bottom of my KISS with Snoopy loops. In underwear and t-shirt I now carry the remaining material to S4. Only the Bonex scooter I used to get in remains at S3.

I now put the suit back on and continue. S4 is so short that you almost do not notice it. Now comes the long lake which I usually cross by scooter on the surface. After about 8 minutes I have crossed S4 & S5 and I ascend in the cathedral of the Ressel. Again in a suit and with the device on the back I now climb up the steeper slope and down on the other side of the dome rather steeply. You have to be really careful here. I depost the gear by the edge of the water and start the same game as before. The dry tube stays behind. But first I eat one of the energy bars I brought along. Suit back on and let’s go!

After a short time I see the an aisle to the Northward side and have a quick look inside. Then continue with full throttle. If you only want to dive along full lines, now would be the point to return. Since emerging in the S1 from about -50 meters, it is now down to fragmented line-hopping … but with the rebreather, no flow and visibility of more than 20 meters, this is no problem. I arrive at the junction
where it goes on the right side to the credit hall and on the left diagonally into the south aisle. I go first into the credit hall and look around for a bit. Since I only carry a 2 lt argon bottle, I decide not to ascend here and scooter back to the junction in the south aisle. At the bottom is an empty reel. Actually, I don’t think old metal should lying around here…

Since I can’t see an outgoing line but clay, lots of clay, I attach an arrow on the leash to the exit along with my reel. Slowly I swim up the clay slope. The ceiling is coming down more and more and obscures the view inevitably. Then the ceiling goes up again but shortly afterwards there are a lot of plates on the ground that narrow the passage to about a height of 1 meter. Slowly, I force myself with scratching my back and stomach over the plates. Although the passage continues well in the distance, I decide to return after a quick look back. With almost zero visibility I reel back to my arrow. Actually I wanted to go to the end of the South aisle. But with a flooded leg, and as now it is getting cooler, and knowing that Rick and John had mentioned something about sidemount and a dangerous boulder choke told at the end of the aisle, I put the reel a side and scooter back.

After 75 minutes, I’m already back in the cathedral of the Ressel. Business as usual. I take a few photos before I scooter back to the bivouac hall. This time, I pass through both siphons already in 5 minutes and shortly thereafter ascend in S4.

I am vey content and get ready in S3. Slightly surprised that I have not met “MAX” anywhere. But as a friend told me afterward, the scooter was already lying there in June…

So probably flooded or otherwise damaged. Seems that the Ressel is getting crammed. Luckily, I have nothing to fear something like this thanks to my Bonex scooters.

Since I want to break the “old” record with the Silent Magnus scooters from the penultimate year, I decide to give full throttle. I dive down and continue with half speed through S3, Schikane and S2 until it goes deeper. From the last junction I go to full throttle and don’t let go of the trigger. I leave the scooter of MAX to the right left and dash down the corridor until the funnel and down at full throttle. Awesome! With continuous pressure compensation I arrive at the horizontal passage and fly along the line.

After 39 minutes I am already in the funnel at 30 meters and hang in my first decompression stop. I smirk, knowing already that I have broken the record…
After 74 minutes I surface in the Ressel again. Exactly 10 hours later I see the sun again. Can’t imagine that the guys from Italy match this time with their “world’s best” scooters…

Now need to carry all the material back to the car myself since no “sherpas” are available. An arguable pleasure at still 34° Celsius. On the other hand, the heat makes the equipment dry almost during the transport. After a short night’s sleep, I am up early the next morning, then back on the way home. The day in the Ressel was exhausting. But every pound that I had to carry alone between the siphons have been made up for by the beautiful cave passages. Flying through these aisles with the scooter is a unique experience. 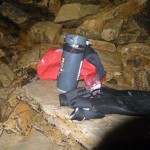 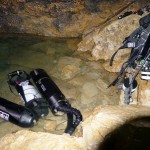 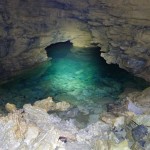 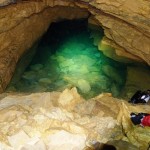 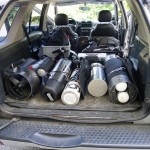