Rick Stanton, a renowned British cave diver and explorer, has a passion for exploring caves in France. One of the caves that repeatedly draws his attention is the Emergence du Ressel in Southern France, in the department of the Lot.

In 1998, he commenced a long term exploration project at this cave. Several dives into the system followed over the course of the years, these eventually included overnight stays in a bivouac chamber. Then, back in 2000, he believed to have reached the end point of the cave; this has probably seen fewer people than supposedly were on the moon. Eventually Rick found a side tunnel which was previously unknown and started to explore it in 2011. On that expedition he laid 805 metres of new line in one go; an incredible achievement. This year the team returned there & laid a further 75 metres of line to reach a series of gravel squeezes which they believed to be too dangerous to pass through because of the high risk of an avalanche entombing them in there for ever.

This most recent exploration dive started at 3 pm on April 14, 2012 and would keep Rick and his partner in this venture, John Volanthen, in the dark and cold – both air and water temperature were around 13° Celsius – for nearly two days, they returned to the sunlight on April 16 at 1 pm with new mapping data, collected by a device invented and built by John.

From the total distance of 4,6 kilometres into the cave system, the Bonex Discovery and Discovery RS scooters were a critical part of the equipment. While the first 2,35 kilometres are travelled with the support of larger scooters from another manufacturer, the Discovery models are the preferred choice for the last 2,3 kilometres into the cave. “We have to carry the all our equipment over two boulder piles and the big scooters weigh 60 kilos each, there is no way you can carry those in a dark, uneven and slippery environment,” explains Rick and continues: “Furthermore we rely on the Discovery models as a backup for the main scooters in the unlikely event that those should fail as the Bonex scooters would still incredibly have enough range to cover for this as well, so they give us the best of both worlds. With our air supply, we follow a similar concept by the way. We go into the cave system with a big rebreather and then switch to a smaller sidemount rebreather at the camp site for all the diving beyond.”

It is only on the recent two trips that Rick has ever taken scooters beyond the Bivouac Chamber, prior to the availability of the lightweight, high performance Bonex scooters all previous dives to the end were made by swimming. 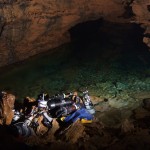 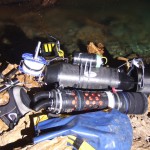 Closer look at equipment, the mapping device is attached to the scooter. Picture taken at far side of the bivouac hall 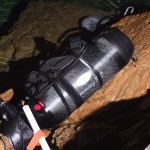 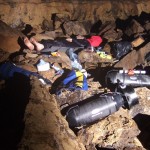 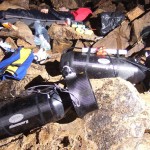 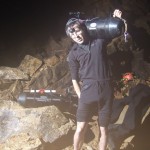 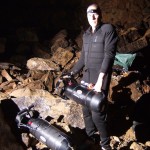